A brief case report of duplicated bladder exstrophy: A congenital malformation in paediatrics

Due to the inability to identify the ureteral orifices during surgical repair, a normally positioned external urethral meatus joined a closed bladder posterior to the exstrophic one. Both ureteric orifices opened into the closed bladder’s thin distensible wall. There was recti divergence and diastases of the pelvic bones. Because the exstrophic wall was the only muscular component, it was decided to excise an elliptical strip of the muscular wall in the midline and establish communication between the two bladders. The exstrophic wall was then closed, combining the two bladders into a single cavity, and the urethral plate tubularized to create a new urethra.

After C/S delivery a 2-day-old boy was dispatched to our clinic with the diagnosis of classic bladder extrophy (Fig 1). During the physical examination a wet surfaced extrophied bladder plate of about 5 cm was seen. The fallus and urethral meatus of the patient was seen to be normal. Testis and anus was seen to be normal. An 8 Fr urethral foley katheter was inserted. The tip of the foley catheter did not come out of the extrophied bladder’s mucosa. Clear urine drainage from the foley catheter was seen. Duplicated bladder extrophy was considered. The serum creatine levels were seen to be normal. The distance between the two pubic bones was measured 5 cm in the pelvic x-ray. During the ultrasound performed at the operating room the normal bladder and foley baloon was seen behind the extrophied bladder plate. Grade 5 hydroureteronephrosis of the left kidney and grade 2 hydroureteronephrosis of the right kidney was seen. It was seen that both of the ureters were opening to the posteriorly placed normal bladder (Fig 2). Both ureter orifices were normal in location and size. The bladder capacity was found to be 45 cc. During the operation the anteriorly placed extrophied bladder plate was excised. Both ureters were found to be opening to the posteriorly placed normal bladder tissue. Distal ureter and left lateral wall of the bladder was anastomosed by end-to-side neosistostomy 3 cm proximal to left ureterovesical junction. After that abdominoplasty was performed to the patient comfortably. 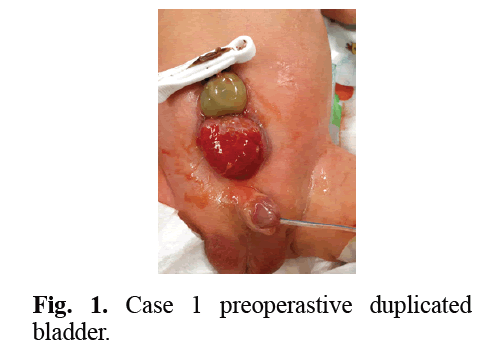 A 1.5 month old boy with pubic diastasis, penopubic epispadias, low set umbilicus, divergent rectus abdominus muscle and an abdominal hernia inferior to umbilicus was introduced. He voided from the epispadiac penis (Fig 3).There was a hypopigmented circular area of skin 3 cm in diameter in lower half of the bulging hernia. Both testes were in normal scrotal position (Fig 4). Abdominal ultrasound revealed bilateral normal kidneys and an intact pelvic bladder. The patient underwent cystoscopy, abdominoplasty and epispadias repair. There was no communication seen between the normal inner bladder and outer hypopigmented plate. No connection was seen between the mucosa of the normal bladder and extrophied bladder in both of our patients with anteroposterior type of duplicated bladder extrophy. The pathology results of both cases were mature keratinized multilayered squamous epithelium. There was no difference seen between the pathology results of dry and wet type of bladder extrophy.

Extrophy/epispadias complex is composed of mid-line defects ranging from epispadias to cloacal extrophy.

Classic bladder extrophy which is seen 60% is the most common form of the extrophy/epispadias complex. It presents with pubic diastasis and epispdias in addition to open bladder mucosa.

In pseudoextrophy the musculoskeletal defects of classic extrophy are seen but there are no urinary system defects [7]. In superior vesical fissure musculoskeletal system defects are seen as well as a small connection between the bladder and minimal extrophied bladder. Covered extrophy is similar to classic bladder extrophy. Covering the bladder there is only a translucent skin or sometimes an isolated bowel segment. If there are no ureters seen in an extrophy bladder case, duplicated bladder extrophy must be considered. Duplicated bladder extrophy was first defined by Marshall and Muecke [5].

Two types of duplicated bladder extrophy are described. In the anteroposterior form the extrophied bladder plate is located superiorly, the closed bladder is located inferiorly and both of the ureters open into the closed bladder. In this form the surgical approach is the excision of the extrophic plate and reconstruction of the abdominal wall. The second type is defined as the collateral form. In the collateral form the two bladders are located side by side and there is one ureter opening to each bladder. Surgical approach is either the excision of the duplicate bladder or the augmentation of the duplicate bladder to the other bladder [4].

In the anteroposterior type duplicated bladder extrophy the mucosa may be seen wet in the early stages and dry in the later stages. Decision made according to the mucosa only may lead to a misdiagnosis. Differential diagnosis should be made by detailed physical examination, ultrasound and cystoscopy. Although anteroposterior type duplicated bladder exstophy shows a better clinical course than classical bladder extrophy in terms of renal dysfunction, hydronephrosis, vesicoureteral reflux and incontinence, these patients should still be followed closely. 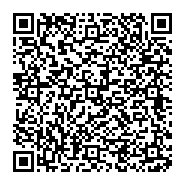