A rare complication of circumcision due to monopolar cauterization: Penile necrosis

Penile necrosis due to monopolar cauterization during circumcision is a rare complication and may cause organ loss. When monopolar cauterization applied on an end-organ, current flows through the organ and, causes disruption of blood flow and oxidative stress. Penile injury may include skin, glans and cavernous bodies. Injury can be limited with the help of medical treatment and hyperbaric oxygen treatment, but eventually the need for reconstruction arises. Some case reports of application of feminizing genitoplasty after total organ loss are present on the literature. However, lengthening of penis via dissection of cavernous bodies and application of skin graft seems more appropriate as a method of reconstruction.

At this case report, three-year old male who had penile necrosis after having circumcised at another center will be discussed under the light of current literature. As soon as the patient was hospitalized, medical treatment and hyperbaric oxygen treatment started. However circulation of the necrotic tissue didn’t improve and necrotic part of the penile skin, glans and cavernous bodies were debrided. After the debridement, two centimeters of cavernous body remained. Once tissues recovered, as a second operation, cavernous bodies were dissected through pubic arms and skin graft was applied. As a result, five centimeters of penile body was achieved. Post-operatively no problem was encountered and patient was discharged 23 days after circumcision.

Circumcision is one of the most common surgical practices and complication rate is around 1% [1]. Many methods were described but until recently, electrocauterization was not preferred due to its possible
risks [2]. There are conflicting results at the literature regarding complications of monopolar cauterization during circumcision [2-4].

Differences of approachment might be because of this complication is encountered very rarely. After penile necrosis takes place, it is sensible to use medical treatment and hyperbaric oxygen modalities. However at some cases, it seems that tissue loss is inevitable [3]. Yet, feminizing genitoplasty is a tough decision to make [4].

At this case report, three-years old male patient who had penile necrosis after circumcision with monopolar cauterization is presented. Medical treatment and hyperbaric oxygen treatment was started after application but benefits of these treatment modalities seemed to be limited. After the debridement of the necrotic tissues, penile reconstruction was practiced and skin graft was applied. No serious complication was encountered and patient was discharged 23 days after circumcision.

Three-year old male patient with no other morbidities was circumcised on an outpatient setting. After being discharged, patient re-applied the same center because of disruption of the circulation of glans penis. At this center, dressing with an antibiotic pomade was applied and local care was advised. However, the patient’s symptoms were not improved and urethra was catheterized with an 8f foley catheter and referred to our hospital. Patient was hospitalized on the fifth day after circumcision. At the bed-side examination, glans and distal one centimeter of penis evaluated as necrotic (Fig 1). But when penis was incised at this level, bleeding occurred. Broad-spectrum intravenous antibiotic (sulbactam-ampicilline and amikasin), local glycerin and bacitracine pomade treatment was started. Patient was consulted to pediatric hematology department. Initial coagulation parameters was normal. Intravenous heparine, dextrane-40, ilioprost and pentoxyphylline treatment was started. Meanwhile, hyperbaric oxygen treatment and hydrotherapy for an hour twice daily started. After 2 days, heparine infusion was stopped and enoxaparine was started. 11th day after the circumcision, debridement was made, considering benefits of medical treatment happened to be limited and demarcation line developed. During debridement, once glans was incised, no bleeding occurred. Necrotic tissues were excised and only proximal half of the penis remained. At this level, bleeding occurred and debridement ended. Urethra catheterized with a 6f foley catheter. Skin fleb was prepared using surrounding tissues and penis was implanted under scrotal skin at the suprapubic region (Fig 2). After the operation, enoxaparine, dextrane-40, ilioprost and pentoxyphylline treatments were stopped. No complication occurred after the debridement. Eight days after the debridement, penile reconstruction was made. Penis isolated from surrounding tissues and degloving was made until penile root was reached. Penopubic ligament was dissected (Fig 3). At the end, five centimeters of penile length was achieved. After this, full-thickness skin graft was harvested from antecubital region. Graft was spread over penis and sutured. Fat tissue at suprapubic region was excised in order to prevent buried penis. After this penile reconstruction was concluded (Fig 4). Wound dressed made with Bactigras, Smith and Nephew. Postoperatively diazepam and ibuprofen treatment was started. Wound dress was removed 3 days after penile reconstruction and grafts evaluated as well-adapted. Hydrotherapy was started. Urethral catheter was removed 12 days after penile reconstruction. Patient urinated with a good calibration through neomeatus at the tip of the penis. He was discharged with local methylprednisolone treatment. On postoperative day 58 after the circumcision, patient re-applied to clinic without any complaints (Fig 5). On examination, a granulation tissue at the ventral site of penis was seen and excised. Cystoscopy was practiced and no pathology was found. The patient still uses Contractubex and local methylprednisolone treatment. 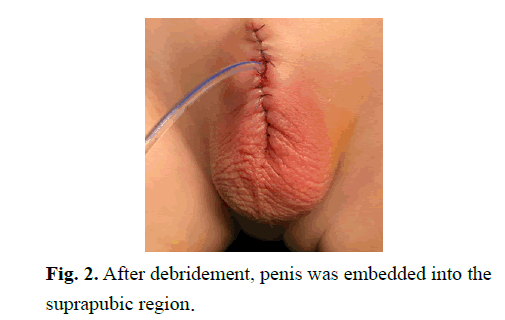 Fig. 2. After debridement, penis was embedded into the suprapubic region. Fig. 3. Penis dissected through the pubic roots and 5 cm of penile length was achieved. 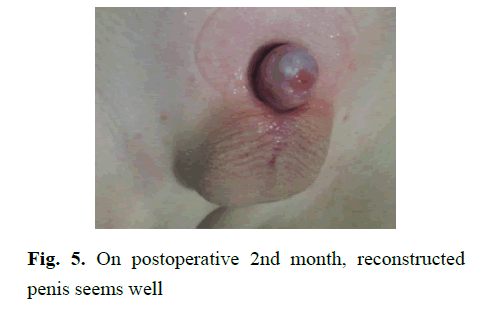 Penile necrosis due to monopolar cauterization during circumcision is a rare but serious complication that is hard to manage. In this case, no improvement seen in the necrotic parts despite intense medical treatment, that is being consistent with literature, and debridement necessitated. After the debridement, cavernous bodies dissected, penile reconstruction was made and penile length increased more than twice. Skin defect was closed with an autologous skin graft. Patient discharged 23 days after circumcision without any problem.

The usage of monopolar cauterization is a risky situation that might even cause organ losses. However, once the complication develops, penile reconstruction via cavernous body dissection and skin graft is an applicable
and satisfactory option. 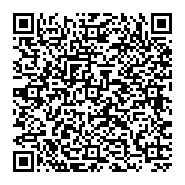