Congenital Anterior Urethral Diverticulum (CAUD) is defined as a cystic dilatation of the anterior urethra and is one of the rare causes of bladder outlet obstruction. Its embryological basis is discussed [1]. It is seen in the penile urethra in one third of cases. Two types have been defined radiologically: saccular and globular diverticula. Although there are cases with congenital anterior urethral diverticulum defined antenatally, the diagnosis is usually made postnatally. Diagnosis; It is determined by the history, clinical evaluation and radiological examinations. In this case, we aimed to report a rare combination of two anomalies associated with congenital anterior urethral diverticulum and posterior urethral valve [2].

One-day-old male patient had bilateral hydronephrosis, predominantly in the left kidney, during prenatal follow-up. At the first postnatal examination after term and cesarean delivery, a swelling in the ventral penile skin was detected (Fig 1). In the urinary system ultrasonography performed at one day of age, right kidney dimensions were measured as 54 × 26 mm, grade 3-4 ectasia, and pelvis AP diameter 15 mm. Parenchyma thickness decreased and parenchyma ecogenicity grade 2 increased. Left kidney size was 59 × 28 mm, grade 4 ectasia, pelvis AP diameter was 15 mm. Bilateral ureters were dilated and tortuous. The bladder wall thickness was 9 mm, and the proximal urethra was dilated at the 2 cm segment and its diameter was 4.6 mm (Fig 2). Diagnostic cystoscopy was performed at the age of 8 days and cystofix was applied to the patient who could not be probed via urethral route. Posterior urethral valve and anterior urethral diverticulum were visualized in cystoscopy. Due to the narrow and small urethra due to the patient's age and therefore not technically suitable for valve ablation, ablation was not performed and cystofix was used for bladder drainage. A grade 5 vesicoureteral reflux was detected in the left kidney in voiding cystourethrography performed by giving opaque cystofix. Bladder contours were irregular and diverticular filling excess was observed. Filling of the diverticulum with opaque was observed in the urethra (Fig 3). Static renal scintigraphy at the age of 2 months revealed normal size, localization, normal DMSA uptake and right kidney (100%) showing homogeneous material distribution and nonfunctioning left kidney (0%). Cystoscopy and valve resection were performed at the age of 3 weeks. At the age of four months, control cystoscopy was performed and ablation was performed for residual valve. Control cystoscopy performed before diverticulum excision showed no residual valve and then diverticulum excision and urethroplasty were performed (Fig 4). 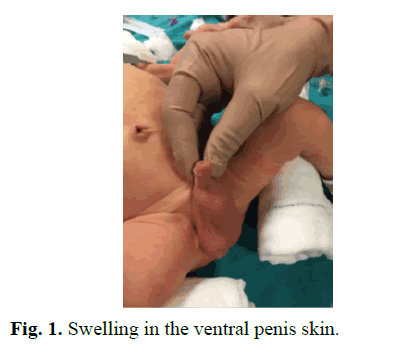 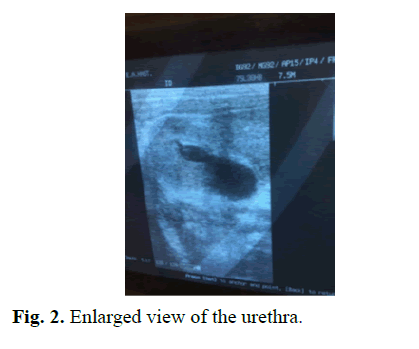 Fig. 2. Enlarged view of the urethra. 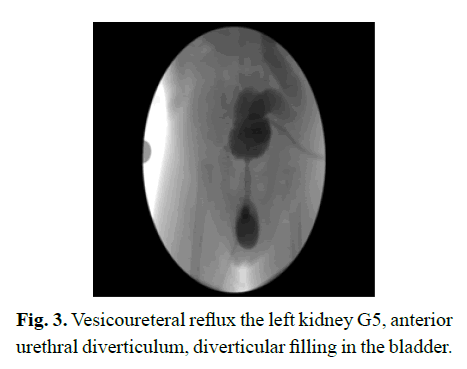 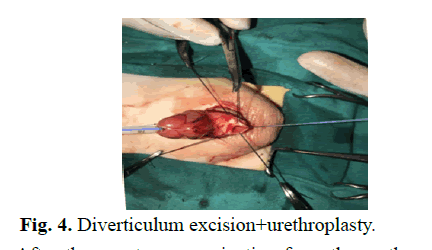 After the spontaneous urination from the urethra after urethroplasty, cystofix was removed. In the control cystoscopy performed at the age of 19 months, it was observed that the urethra was in good. In the postoperative first year urinary system ultrasonography; A soft tissue area of 37 mm, which may belong to the kidney tissue, was observed in the left kidney. The parenchyma was greatly thinned. Right kidney dimensions were measured 60 × 27 mm.

The pelvicalyceal system in the right kidney is grade 2 ectasic. Pelvis Ap diameter measured 9 mm. The left ureter appears to be dilated with a diameter of approximately 9 mm before bladder entry. Simultaneously in static renal scintigraphy, it was observed that the left kidney was nonfunctioning (11%) and the right kidney showed normal size, normal DMSA uptake in localization and homogeneous material distribution (89%). Fig. 5. View of the urethra with postop urethragraphy.

Overactive detrusor contractions were not observed during the filling phase. It was found that 20 ml of voided and 50 ml of residual urine remained in the excretion phase. Bladder compliance was measured as 13.5 ml/cm H2O. Clean intermittent catheterization was initiated six times a day. He did not have a urinary tract infection during his follow-up.

In the development of the urethra, the formation of a continuous layer by joining and advancing urethral folds in the midline, from proximal to distal, is a multifactorial process. Any malfunction that may occur in this process may result in genital system development anomaly [3-5]. The Wolffian system appears as two elongated ducts. While it is associated with mesonephrons in the cranial, it opens to the urogenital sinus at the caudal. At the end of the first month of gestation, the cloacal membrane, which will later form the urogenital system, appears on the outer surface of the ventral part of the embryo. The cloacal membrane is divided into two as anterior and posterior.

The anterior part forms the urogenital membrane. The first indicator of differentiation begins with the increase in the distance between the genital structures and the anus. Later, the lengthening of the phallus continues with the formation of the penile urethra from the penile urethral cleft and the development of the preputium. External genital differentiation has not yet begun in the eighth week of gestation. In the ventral of the phallus, the urethral groove is located between the two urethral bumps. The penile urethra is formed by the union of the medial parts of the endodermal urethral bumps [6]. The Posterior Urethral Valve (PUV) is thought to be formed by the abnormal entry of the mesonephric duct into the fetal cloaca embryologically. It is defined as a malformation in which membranous folds obstruct the membranous and prostatic urethra. Although the embryology of congenital urethral diverticulum is not known exactly; Corpus spongiosum defect, which occurs as a result of insufficient metamorphosis of the periurethral mesenchyme, is the most common cause.

Congenital anterior urethral diverticulum is defined as a cystic dilatation of the anterior urethra and is one of the rare causes of bladder outlet obstruction. Clinical findings vary with age and disease severity. Slow and fine voiding, recurrent urinary tract infection and ventral penile swelling can be seen. Imaging methods are; ultrasonography, voiding cystourethrography, computed tomography and magnetic resonance imaging. Treatment options for congenital anterior urethral diverticulum are variable and the treatment protocol is determined according to the presence of symptoms, upper urinary tract changes, and diverticulum size. Conservative follow-up may be an option for patients without symptoms and upper urinary tract damage. Transurethral resection may be a small intra-diverticulum option with good tissue support. Open diverticulectomy and urethroplasty with or without flaps are recommended for large diverticula.

Posterior Urethral Valve (PUV) is a life-threatening urinary system anomaly by causing infravesical obstruction in boys during antenatal or neonatal period. The classification of the disease was made by Young in 1919 based on autopsy series. With the widespread use of prenatal ultrasonographic evaluation, it is possible to make an antenatal diagnosis. An important finding is the enlargement of the posterior urethra in voiding cystourethrography for diagnosis. Valve ablation can be performed as a treatment by confirming the diagnosis with cystoscopy. Electrocautery, cold knife and holmium laser are the most commonly used methods for ablation. It should be kept in mind that patients are candidates for bladder dysfunction and chronic kidney disease in the future.

The posterior urethral valve was diagnosed later because of weak urine flow, swelling in the penile urethra and inability to probe. Improvement in serum creatinine (from 1.2 mg/dl to 0.5 mg/dl), decrease in the degree of hydronephrosis on urinary system ultrasound, improvement in obstructive bladder changes were detected with cystofix which was implanted to protect renal functions and correct obstruction in our patient. It is reported that the treatment of congenital anterior urethral diverticulum is determined according to the size of the diverticulum and the degree of obstruction. Small and asymptomatic diverticula can be followed conservatively.

Treatment options such as open diverticulectomy, urethroplasty and endoscopic resection are defined for symptomatic and large diverticula. Endoscopic resection treatment was applied to our patient for the diagnosis of posterior urethral valve, and it was observed that there was no valve residue in his controls. For congenital anterior diverticulum, treatment was completed with open diverticulum excision and urethroplasty. Although there is no problem with the diverticulum, our patient is under close follow-up due to valve bladder findings secondary to PUV and upper urinary system problems.