Congenital Anterior Urethral Diverticulum (CAUD) is a rare congenital anomaly. We describe a case of CAUD in a 3-year-old male child, with a history of recurrent urinary tract infections, referred to our clinic for diagnosis and treatment of penile swelling and weak micturition. On physical examination, a painless oval area of swelling, located on the ventral and left lateral aspect of the penis and extending from the corona to the base of the penis, was observable. The swelling was fluctuating in nature and compressible, collapsing completely with applied pressure, with urine dripping through the urethral meatus. Cytobacterial urinalysis, routine blood analysis, and renal analysis were normal. Ultrasound examination revealed normal kidneys and bladder. A retrograde urethrogram revealed a large anterior urethral diverticulum. The patient underwent open diverticulectomy with urethroplasty. The recovery was uneventful and the catheter was removed on postoperative day 10. Six months post-surgery, the patient had no complaints. One difficulty in the management of CAUD is distinguishing it from other anterior urethral malformations. Treatment of a CAUD is informed by the type of diverticulum and should be performed early to avoid complications associated with urinary obstructio

Congenital Anterior Urethral Diverticulum (CAUD) is a rare congenital anomaly caused by a structural defect of the corpus spongiosum. The clinical presentation of CAUD varies, depending on the age of the patient and the severity of associated obstruction of the lower urinary tract [1,2]. CAUD generally presents as swelling on the ventral aspect of the penis, associated with impairment in micturition. The diagnosis of CAUD is usually based on micturating cysto-urethrogram (MCUG) or retrograde urethrography [1,3]. Severe obstruction of the lower urinary tract caused by CAUD can lead to serious repercussions on the structure and function of the upper urinary tract [4].

Curative treatment for CAUD can be performed using endoscopic division of the distal lip of the diverticulum or diverticulectomy by urethroplasty [5,6]. Herein, we describe a case of CAUD with a rare localisation on the ventral-lateral aspect of the penis. We include a description of the diagnostic process, treatment, and short-term outcomes, as well as a brief review of current supporting evidence regarding the treatment of CAUD.

A 3-year-old boy, with a history of recurrent urinary tract infections, was referred to our clinic for assessment and treatment. His parents reported appearance of swelling on the ventral aspect of his penis 7 months prior. He also presented with a weak urine stream, urinary urgency, and leakage. The penile swelling reduced spontaneously after micturition. Progressively, however, the volume of swelling increased, with spontaneous emission of a few drops after every micturition.

Physical examination revealed a painless oval area of swelling, 3-cm in length, located on the ventral and left lateral aspect of his penis and extending from the corona to the base of the penis (Fig 1). The swelling was fluctuating in nature and compressible, collapsing completely with applied pressure but with dripping through the urethral meatus. No other external genital anomalies or clinically visible associated malformations were observed. 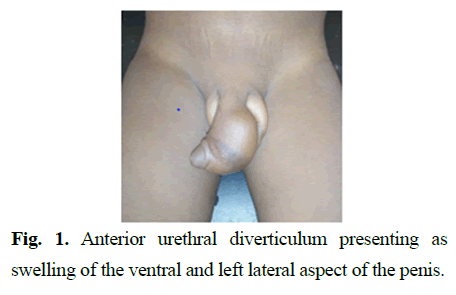 Fig. 1. Anterior urethral diverticulum presenting as swelling of the ventral and left lateral aspect of the penis.

Cytobacterial urinalysis, routine blood analysis, and renal analysis were normal. Ultrasound examination showed a normal kidney and bladder structure. A retrograde urethrogram revealed the presence of a large diverticulum located below the penile urethra which prevented retrograde passage of contrast agent (Fig 2). On voiding film of intravenous pyelogram, the entire urethra was visible but with a thin distal lip observed above the diverticulum visible after filling of the diverticulum by the contrast agent (Fig 3). 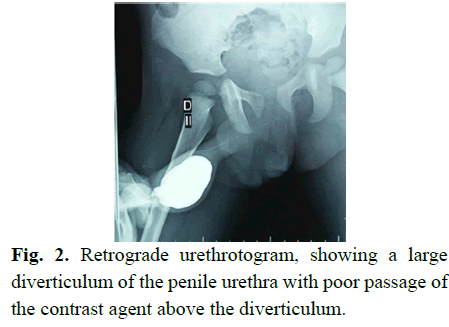 Fig. 2. Retrograde urethrotogram, showing a large diverticulum of the penile urethra with poor passage of the contrast agent above the diverticulum. Fig. 3. Voiding film of intravenous pyelogram, showing the entire urethra but with a proximal lip forming an acute angle with diverticulum (blue lines).

We proceeded with open diverticulectomy and urethroplasty for treatment. After access using a midline incision over the diverticulum, the diverticulum was opened using a longitudinal midline incision, revealing its communication with the penile urethra over a length of 1 cm (Fig 4). Excess tissue was excised, leaving a small flap to approximate and superpose the edges over a transurethral catheter. The recovery was unremarkable and the catheter was removed on postoperative day 10. Six months post-surgery, the patient had no complaints. Fig. 4. Peri-operative opening of the diverticulum, showing its distal and proximal ends, with communication with the catheterised penile urethra.

CAUD is a rare condition [4,7]. The cause of this malformation remains unclear, although different theories have been proposed to describe its development [3]. Of these theories, a developmental defect of the corpus spongiosum resulting from an arrest in periurethral mesenchymal differentiation has been most frequently suggested [1-3,8]. This arrest in periurethral mesenchymal differentiation results in a weak, thin-walled segment of the urethra, allowing the diverticulum to develop [5,7]. Other hypotheses include cystic dilatation of the urethral glands, sequestration of an epithelial nest after closure of the urethral folds, incomplete urethral duplication, and defective fusion of the ventral folds over the urethral groove [1,6-8].

In almost all cases of CAUD, the diverticulum is located on the ventral wall of the urethra, with location in the fossa navicularis occurring in some cases [1,3]. CAUD may also occur along the anterior urethra [6]. The diverticulum usually develops between the bulbous and mid-penile regions, the penoscrotal junction especially [1]. The localisation of the diverticulum near the corona, as in our patient, has previously been reported in one case [6].

Based on radiological appearance, two types of CAUD have been identified, namely saccular or globular/diffuse CAUD [2,6]. The saccular type of CAUD, as observed in our patient, is the more frequent type, presenting as a localised protrusion from the urethral lumen into the ventral wall of the anterior urethra [3]. In contrast, the globular type is a generalised dilatation of the entire anterior urethra [3]. The saccular type diverticulum can produce an obstruction of the anterior urethra via a valve-like mechanism of its distal lip, which closes the urethral lumen [3]. This valve-like mechanism sets up a vicious cycle in which the anterior lip obstructs the flow of urine, like a flap valve, during filling of the diverticulum [5], which can lead to obstruction of the upper urinary tract [1]. Cases of CAUD associated with vesicoureteral reflux have previously been reported [1].

CAUD may present at any age [6], with variable clinical presentation, depending on the patient’s age and degree of associated urinary obstruction [1,3,4]. While CAUD in neonates and infants presents with non-specific symptoms, such as fever, diarrhoea, and vomiting [3,4], in older children, CAUD usually present with a weak urinary stream, recurrent urinary tract infection, dysuria, and post-void dribbling of urine [3-7]. Other symptoms, such as haematuria, frequent urination, urinary incontinence, urine retention, and enuresis, are rarer [3,4,6]. In our patient, the physical examination revealed swelling on the ventral aspect of the penis and scrotum, which was fluctuating in nature, with urine dribbling from the meatus on compression, as previously described [4-7]. CAUD can be asymptomatic, being detected as an incidental finding, sometimes at an adult age [1,7]. However, as CAUD can cause severe obstruction of the lower urinary tract, it may lead to serious repercussions in the structure and function of the upper urinary tract [4].

MCUG can reveal proximal changes in the urinary tract, such as megacystis and vesicoureteral reflux [1,4,6]. In our case, the retrograde urethrogram was limited. Opacification was not possible in the part of the urethra beyond the diverticulum, probably due to the valve-like mechanism of the distal lip of the diverticulum. Voiding Cysto Urethro Graphy (VCUG), which provides a more accurate assessment of CAUD than MCUG, has shown that the obstructing distal lip forms an acute angle with the urethra [9,10]. Sono-urethrography or voiding ultrasound is a non-invasive alternative to conventional imaging studies that use a contrast medium [3]. The diagnosis can be confirmed by observation of an outpouching from the ventral wall of the urethra and a proximal and distal rim on cystourethroscopy [6].

The main differential diagnosis of CAUD is Anterior Urethral Valve (AUV). The relationship between these two pathologies, however, is controversial, with some authors considering these two conditions as being on the same continuum while others have distinguished between the two conditions [1,6,7,9]. AUV is characterised by presence of a valve on cystourethroscopy, with dilation of the proximal urethra, forming an obtuse angle with the ventral floor of the urethra on VCUG [9,10].

Other pathologies can simulate a CAUD, including lacuna magna and acquired forms of anterior urethral diverticula (postoperative, traumatic, or infectious) [3,6,11]. CAUD should be treated to prevent complications, such as hydronephrosis, renal dysfunction, and recurrent urinary tract infections [Grahame].

A small anterior urethral diverticulum may be treated using transurethral endoscopic resection of the distal lip [5]. A large diverticulum, as in our case, or a diverticulum containing stones should be treated by excision of the diverticulum and reconstruction of the urethra, with both procedures performed in the same session [4-6]. The technique of creating a triangular flap can be used for double breasting of the urethral suture line [5]. Temporary urinary diversion, via suprapubic catheterisation, can be performed in cases of urosepsis or obstructive nephropathy [3, 7]. The outcome of the treatment is generally good, over a follow-up of 3 months to 2 years [3-5]. Postoperative complications include urethral fistula and urethral stricture formation [1, 7].

Differential diagnosis of CAUD, particularly for a CAUD with a distal penile localisation, is the main issue in the management of this pathology. Early treatment of a CAUD is indicated to avoid complications of urinary tract obstruction. The treatment is informed by the type of diverticulum, as well as its length and associated complications.

The author(s) declare that they have no competing interests and financial support.