Continuous type of intra-abdominal splenogonadal fusion: A case report with review of literature

Background: SplenoGonadal Fusion (SGF) is a very rare anomaly in which accessary splenic tissue are fused to the left testis. It is either continuous or discontinuous type. Many cases end up having orchidectomy due to lack of awareness of the condition as it mimic a testicular tumor.

Case report: A 22 months old boy with severe penoscrotal hypospadias, bilateral impalpable testes and major cardiac anomalies, had a laparoscopy for his testes, which revealed left testicular mass with accessary splenic tissues attached to the upper pole. It was in turn connected to the normal spleen with a cord of splenic beads. Successful two stage FS procedure was performed for his testis.

Conclusion: Possibility of SGF should be considered when seeing a testicular mass with accessary spleens attached to the testis.

Splenogonadal Fusion (SGF) is a rare congenital a malformation in which the gonads (testis/ovary) or sometimes mesonephric structures like vas/epididymis are adherent to accessory splenic tissues [1]. This anomaly was first described by Bostroem in 1883 and named it conjunctio splenogonadalis [2]. To date only around 200 cases have been reported.

We are reporting a continuous type of SGF in which an intra-abdominal testis was connected to main spleen with a fibrous cord with multiple splenic beads in the cord.

He underwent exploratory laparoscopy and 1st stage HS repair at the age of 22 months. On laparos-copy right testis was found near deep ring and was good size. The left testis appeared like a retro-peritoneal mass located over the Psoas muscle near the bifurcation of iliac vessels (Fig 1). Its upper pole was attached to the main spleen though a fibrous cord. There were multiple different sized splenic beads throughout the entire length of the cord (Figs 2 and 3). Fortunately we diagnosed the condition and decided to do a staged orchidopexy. As the right testis was in a better location we decided to do right first stage Fowler Stephen (FS) procedure and first stage HS repair. The procedure was uneventful. Six months later, right side second stage FS procedure was done with second stage HS repair. On the left side we did first stage FS procedure which was slightly difficult due to the high location of the testis and short vessels. 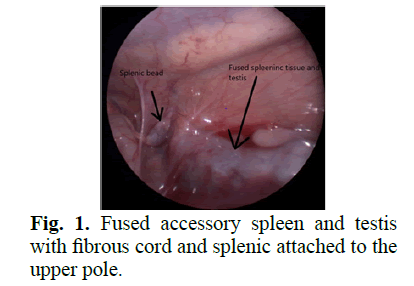 Figure 1: Fused accessory spleen and testis with fibrous cord and splenic attached to the upper pole. 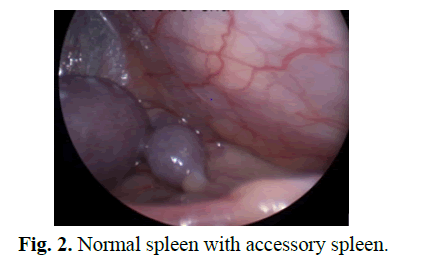 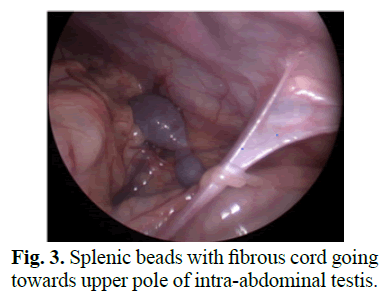 He underwent laparoscopy for second stage left FS procedure after another six months. The mobilization of the testis was difficult due to large size of the mass and retroperitoneal location. The accessory spleen partially tore during dissection causing moderate bleeding. The fibrous cord connecting it to the spleen was transected. After full mobilization, we were unable to retrieve the testis with adherent splenic tissue into scrotum with a size 12 step port as the combined size was too big. We decided to give a groin incision and entered peritoneum and grabbed the testis with the accessory spleen and pulled it out with help of Babcock forceps. On close inspection we found a 7 cm × 2 cm splenicule attached to the upper pole of left 1 cm × 2 cm testis (Fig 4). The accessory spleen was shelled out from the testis with help of bipolar cautery easily as thee was a good cleavage plane (Fig 5). The testis was then fixed to the bottom of the scrotum with no significant tension. Post op recovery was uneventful. 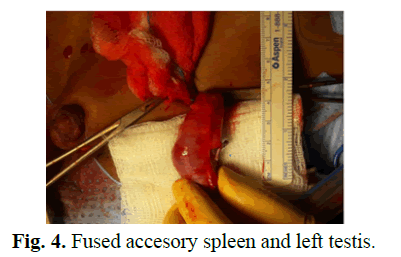 The histology came back as normal splenic tissue with a few testicular tubules. Six months later the patient was seen in clinic and we found both the testes in scrotum and good size.

The etiology of SGF is still not clear. It is thought that during embryogenesis, the spleen moves to the left with rotation of the stomach. In doing so it gets very close to the developing gonads. Either due to inflammation or lack of apoptosis this fusion happens [1,5]. The continuous type is more commonly associated with other congenital defects mostly limb defects known as splenogonadal fusion limb defect syndrome [6]. It also has a known association with other anomalies such as cardiac anomalies, micrognathia, cleft palates and anorectal malformation [2]. Although it has been mainly reported in males with M: F of 16:1 but this may be underestimation as in majority of male patients this anomaly comes to attention either due to investigations for UDT or testicular mass which are the most frequent presentations, while in females it is more often discovered incidentally during a gynaecological surgery [7].

Majority (70%) of these patients present before 20 years of age and 50% are found before the age of 10 years [5,8]. The usual mode of presentation in children is an undescended testis or inguinal hernia [9-11]. If palpable it may be diagnosed preoperatively as a testicular mass. Among the impalpable intra-abdominal cases, especially when laparoscopy is done, mass of splenic tissue attached to the upper pole of testis, with or without connection to the main spleen, may be seen [8,11]. Other modes of presentation include painless scrotal lump and acute scrotum [10-13]. In adults it usually present as a testicular mass, or investigations for infertility raising the alarm for testicular tumor [11,14]. It is rarely diagnosed before surgery due to rarity of the condition. Some cases have been diagnosed preoperatively by USS, CT or MRI [8]. Technecium-99 m Sulphur Colloid liver-spleen can confirm the diagnosis in suspected cases pre operatively [12]. Per operative frozen section may be helpful if the facility is available [5]. In our case though USS diagnosed accessary spleens pre operatively but could not see the testes and splenic tissues adherent to the testis, so a definitive diagnosis of SGF preoperatively was not made.

In up to 30% of the cases an un necessary orchidectomy is done as these patients present as testicular mass with concern of malignancy [14]. If diagnosed in time, the testis can be salvaged in majority of these cases. Usually there is a cleavage plane between the testis and the aberrant splenic tissues through which the splenic tissue can be shelled out easily, as it was in our case [7,15,16]. In cases with fibrous cord connecting testis upper pole to spleen, just detaching the cord usually helps in orchidopexy [8,12]. Leaving some nodules behind especially in cases of intra-testicular splenic tissue or even a larger piece of spleen attached to testis, does not seems to cause any significant issues [16]. However, regular testicular USS is suggested as these tissues are can be involved in any problems which can affect a normal spleen like hemolytic anemia, idiopathic thrombocytopenia, leukemia, mumps, infectious mononucleosis or malaria [5]. Tumor risk of left over aberrant splenic tissue is very low. Only 4 cases of tumors have been reported so far in the literature [17]. All of these cases were in intraabdominal testes. So generally orchidopexy is advised unless intra-abdominal SGF is diagnosed after 10 years of age which puts them at high risk of malignancy or per operatively there are some concerning features where orchidectomy may be considered.

SGF is a rare disorder that can easily be misdiagnosed. Awareness of the disease could help in cor-rectly diagnosing the patient and avoiding unnecessary orchiectomy. The splenic tissue can be easily peeled off from testicular tissue with no damage to testis.