Horseshoe kidney is the most common fusion defect of the kidney. It is seen in one in five hundred of the general population, with a male preponderance. It is usually asymptomatic and is often an incidental finding. However, due to their location and proximity to other structures such as the duodenum, CBD, and large intestine, horseshoe kidney can alter their course and pose a difficulty in diagnosis and management of their diseases.

In this mini-review, we are presenting and discussing a previous case of horseshoe kidney leading to ERCP failure, including a mini-review of the literature. The ideal management for a patient of cholelithiasis with choledocholithiasis is usually pre or post-operative ERCP plus laparoscopic cholecystectomy. However, for such patients with co-existing horseshoe kidney, can ERCP failure be anticipated? For such patients, the choice of procedure becomes Laparoscopic cholecystectomy with lap CBD exploration.

Horseshoe kidneys are the commonest fusion defect of the kidneys, occurring in approximately one in every five hundred individuals, amounting to approximately 0.25% of the population [1,2]. They have a male preponderance of 2:1 [2]. These are characterized by abnormalities in position, rotation and vascular supply [3]. They are often asymptomatic and are identified incidentally.

Choledocholithiasis are CBD stones that are seen in approximately 10%-15% of patients with symptomatic gallstones [4]. They have to be managed urgently, by extraction, to relieve symptoms and to prevent complications such as acute pancreatitis, obstructive jaundice, suppurative cholangitis and septicaemia [5].

ERCP has revolutionized the management of choledocholithiasis especially with the technological developments and advances in endoscopic imaging. Despite the same, biliary cannulation cannot always be achieved easily. Failure to cannulate the CBD has been estimated to occur in 5%-20% of cases [6].

This case, which has been discussed in a previous paper [7] describes a 65-year-old female patient that had presented to the outpatient clinic of our hospital with complaints of pain in the right upper quadrant and epigastric region for three months prior to presentation. She had reported one episode of jaundice at the beginning, two months before the OPD visit. The patient also complained of nausea, loss of appetite, early satiety and loss of weight. She did not report any history of fever, chest pain, any changes in her bowel or bladder functions. Her past history was significant for a well-controlled Diabetes Mellitus.

On further investigations, she was found to have leukocytosis (11.6 k/mm3). Her kidney and liver function tests were within normal limits, with no other significant findings in the other blood investigations. Her USG abdomen showed the incidental finding of horseshoe kidney with severe hydronephrosis and parenchymal thinning in the left kidney. It was significant for cholelithiasis with a dilated CBD, measuring 9 mm in maximal luminal diameter at the porta. MRCP was ordered which demonstrated horseshoe kidney, distended GB with multiple intraluminal filling defects. CBD was dilated with a luminal diameter of 11.3 mm at the porta with an abrupt distal cut-off and subtle hypo-isodensities seen in the dependent part mid and distal CBD.

ERCP was attempted but it was unsuccessful due to non-localization of the papilla, despite multiple attempts. The mucosal folds were overcrowded, leading to difficulty in accessing the second part of the duodenum. The patient was then planned for, and underwent, laparoscopic cholecystectomy with CBD exploration.

On laparoscopic CBD exploration, CBD was visualized in its whole extent using a nephroscope. A guidewire was passed into the entire length of CBD in case of need for a repeat ERCP postoperatively. The patient underwent laparoscopic cholecystectomy, and the CBD was repaired over a T-tube. A subhepatic drain was placed. The patient’s drain and T-tube output were monitored postoperatively. T-tube was kept clamped once the drainage decreased to less than 50 ml/day with subsequent removal on the fourteenth postoperative day, after a normal T-tube cholangiogram.

In the present case review, both the ultrasound abdomen and MRCP revealed the incidental finding of horseshoe kidneys. Horseshoe kidney is the most common renal fusion abnormality. They are often asymptomatic and are identified incidentally while investigating for other diseases. It has been estimated that approximately one in five hundred people in the normal population, amounting to approximately only 0.25% of the population, have horseshoe kidneys. As commonly seen with other fusion anomalies, it is more common in males with a preponderance of 2:1 [1,2].

The kidneys are normally located in the retroperitoneum between the transverse processes of T12 and L3. The horseshoe kidneys are different with respect to their location, orientation, and vasculature [8]. Their ascent is often held back by the origin of the Inferior mesenteric artery at L3, but can also be found in the lower abdomen or pelvis. Horseshoe kidneys are seen as having functional renal masses present on either side of the vertebral column. They are fused together with separate ureters that remain uncrossed from the renal hilum to the bladder [3]. In most cases, the fusion happens at the lower pole, although it may occur at the upper pole. This fusion results in an isthmus of tissue which can be either fibrous or parenchymal. The isthmus connecting the two renal masses may be positioned in the midline or laterally, establishing whether the horseshoe kidney is symmetric or asymmetric [9].

This developmental anomaly usually occurs between seven to nine weeks of gestation. The developing kidneys, in the beginning, lie adjacent to each other in the embryonic pelvis below the umbilical arteries. The kidneys ascend out of the pelvis at the seventh week and reach their final position in the retroperitoneal fossa by the end of the ninth week [10]. But in the anomalous condition, the intermediate mesoderm (which gives rise to the metanephric blastema) fails to separate. The ureteric buds grow cranially and come in contact with the fused nephrogenic cords. As the embryo continues to grow, the ascent of the kidney is arrested as the isthmus of the kidney makes contact with the inferior mesenteric artery at the L3 level [11]. However, it has been seen that the isthmus is found immediately below the inferior mesenteric artery in 40% of cases only; with approximately 20% of the cases wherein the fused kidney never leaves the pelvis [10].

Most (approximately 90%) of the horseshoe kidney are asymptomatic. However, they are at a greater risk than normal kidneys, to develop complications. They are prone to develop obstruction, VUR, infection, hydronephrosis, renal stones, loss of renal function and malignancy. They are also, frequently, concomitant with other vascular or genitourinary anomalies [11].

For this patient, her horseshoe kidney is seen lying at the L2-L3 level with the inferior fused pole. We can see the duodenum and CBD anteriorly and superiorly to the kidney, descending aorta posteriorly, and the ascending and descending colon anteriorly and laterally on either side, respectively (Fig 1 and 2). 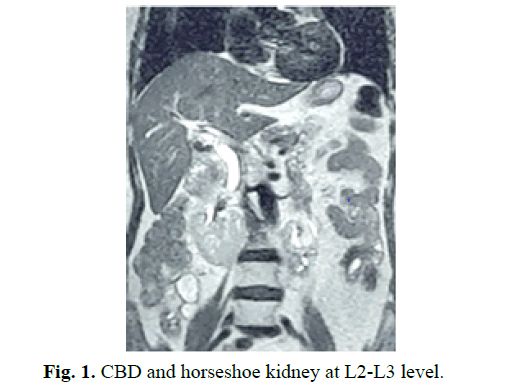 On laparoscopic exploration of CBD for this patient, sludge was visualized in the distal-most portion of the CBD. MRCP had revealed a distal abrupt cut-off of the CBD. The whole CBD was visualized using a nephroscope, and a guidewire was passed through the entire length of the CBD into the duodenum. No cause could be identified as to why the papilla couldn’t be accessed or visualized during the ERCP or for the crescent sign (abrupt distal cut-off of CBD) on MRCP. On reviewing the USG abdomen and MRCP, the close proximity of the horseshoe kidney to the duodenum and the CBD (Fig 1, Fig 3 and 4) was identified as the cause of failure of ERCP. The horseshoe kidney caused the displacement of the duodenum anteriorly leading to overcrowding of the duodenal loops and altered the course of CBD, leading to difficulty in locating the papilla. 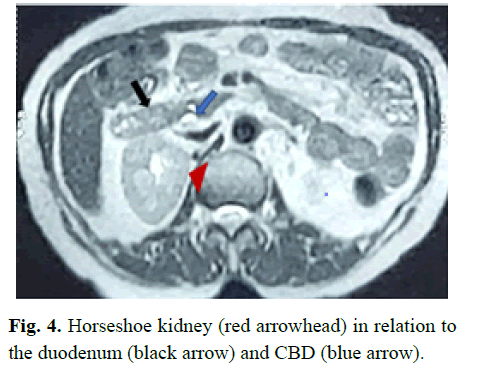 Horseshoe kidneys are the most common fusion defects and are usually an incidental finding, as was in this case. The patient was being worked up for her complaint of pain abdomen leading to the diagnosis of cholelithiasis with choledocholithiasis with horseshoe kidney. The patient underwent ERCP based on her findings of MRCP but it failed due to non-localization of the papilla. In cases of failed ERCP, laparoscopic CBD exploration becomes the choice of procedure. Here the presence of horseshoe kidney altered the course of CBD and caused overcrowding of duodenal mucosal folds, which lead to ERCP failure. In such cases, can we anticipate ERCP failure? Can such patients be directly advised for a onestep approach of laparoscopic cholecystectomy with laparoscopic CBD exploration or should the patient undergo a repeat ERCP? The choice of procedure is highly variable and depends on the surgeon’s expertise in minimally invasive surgery, endoscopist’s expertise, institutional preference, and ultimately, the patient’s decision.

The authors of this work have nothing to disclose.

Written informed consent was obtained from the patient for publication of this case report and accompanying images. A copy of the written consent is available for review by the Editor of this journal.

This research did not receive any specific grant from funding agencies in the public, commercial, or not-forprofit sectors.

This is a mini-review of a case report study and ethical approval is not required. 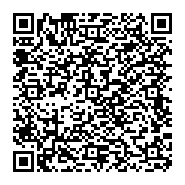