Longitudinal Vaginal Septum (LVS) is a rarely encountered anomaly in the pediatric age group. It usually occurs in association with Mullerian Duct Anomalies (MDAs), Urogenital Sinus (UGS), and cloaca or may also rarely as an isolated entity [1]. As a result of an obstruction in the vaginal cavity caused by LVS, it usually presents in adults causing dyspareunia, hematocolpos and infertility. Presentation in childhood and prepubescent girls is rare [1].

This article aims to report a rare case of UGS with LVS presenting as pyocolpos in a child and also to highlight the early endoscopic management of LVS along with the simultaneous repair of UGS.

A 4-year-old girl, presented with high-grade fever, urinary tract infection, and purulent discharge per vagina. Her systemic examination was normal and examination of genitalia revealed a normal labia and a single opening in the vestibule with purulent discharge, suggestive of persistent Urogenital Sinus (UGS). Per rectal examination revealed a boggy swelling in the anterior rectal wall. The patient was already investigated outside our institute with ultrasound pelvis and Contrast- Enhanced Computed Tomogram (CECT) abdomen showing a low-density collection in a septate vagina of size 5 × 3 × 3 cms suggestive of pyocolpos (Fig 1) and no other obvious urogenital anomaly. The rest of the organs were normal. Urine and pus culture-sensitivity revealed Escherichia coli and intravenous ceftriaxone was started as per the sensitivity report. The child was taken up for examination under anesthesia and cysto- genitoscopy, which revealed a UGS with a common channel length of less than 1 cms. Purulent material could be seen discharging from the vaginal opening of UGS. On genitoscopy, there was a complete longitudinal vaginal septum extending from UGS orifice till cervical opening (Fig 2a and 2b). Vaginal cavity was filled with purulent material. The urethra, bladder, and bilateral ureteric openings were normal. The pus was drained and both hemivagina were irrigated thoroughly. Along with bladder catheterization, a drain was kept in the vagina for a period of 2 weeks. The child improved and the sepsis settled. She was subsequently re-evaluated and MRI (Magnetic Resonance Imaging) pelvis was suggestive of the longitudinal vaginal septum with a single uterine cavity and a single cervix with no vaginal collection. Flap vaginoplasty with inverted U flap was performed for low type UGS. In the same sitting, 9 french pediatric resectoscope was used for resection of the longitudinal septum. The septum could be easily incised starting from top to bottom, using the loop of resectoscope with cutting current. No bleeding was present and an incision of the septum left a normal capacious vaginal cavity. The endoscopic procedure took about 15 minutes. Postoperatively, the child did well and is on regular follow up for the last 3 years having normal vaginal and urethral orifices. 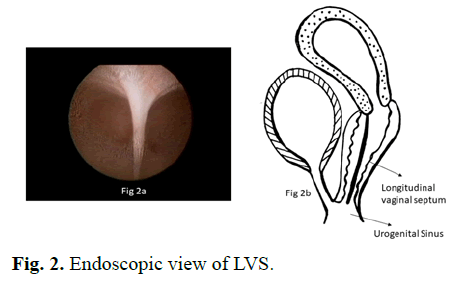 LVS is a rare congenital anomaly, although embryogenesis is still not clear, it is a result of incomplete fusion or resorption of Mullerian duct [2,3]. This anomaly is rarely seen as an isolated anomaly and mostly is associated with a persistent cloaca, persistent urogenital sinus, and other Mullerian duct anomalies like didelphys uterus, septate uterus, or bicornuate uterus [1]. Their common association with uterine anomalies has been linked to poor pregnancy outcome [3]. In a recently proposed classification of vaginal malformations by Ruggeri et al. [2], LVS has been categorized as a type V B anomaly, a disorder of fusion of the Mullerian ducts.

LVS accounts for 12% of all vaginal malformations. In a study of 202 cases of LVS, more than 50% of cases were asymptomatic and usually presented in post pubertal females with complaints related to sexual, reproductive and obstetric complications [1,3]. It is quite rare to diagnose LVS in pediatric age group, unless they had some associated anomalies or obstructive symptoms like hydrocolpos or pyocolpos [1], causing mass effect or sepsis as was seen in our case. In our case, the urinary reflux in vagina from the common channel of UGS was the likely cause of pyocolpos. With the increasing use of pelvic imaging they are also being identified incidentally in children who are being worked up for other anomalies [1].

The management of LVS in adults or post pubertal females is well established with surgical intervention required for symptomatic cases [1,2,4] They are managed on the basis of the presentation and the current recommendation is surgical excision [1,4,5] The most commonly employed techniques are sequential clamping, incision and suturing the septum [2]. This technique although safe in most of the cases require meticulous dissection and hemostasis to avoid any rectal or bladder injury. To simplify, various other techniques for LVS excision has been used like bipolar forceps, ligasure, harmonic scalpel and surgical stapler, which also required reinforcement sutures [6]. Hysteroscopic ablation in adult females has also gained popularity and all these techniques have been reported to have excellent results [7].

However, there are only few reports in literature regarding the management of children with LVS, as it is difficult to establish the need for intervention. While it is relatively easy to excise the septa in post pubertal females with good results due to the larger vaginal cavity, it is difficult to do so in pediatric age group and prepubertal females. This adds on to the surgical time when the child is already undergoing some major reconstructive work and for isolated cases of LVS, there are no clear recommendations [1]. In such a scenario, we believe an endoscopic incision using a paediatric resectoscope is advantageous, as it is minimally invasive, can be easily accommodated in prepubertal vagina and does not add much to the time utilized for the genital reconstruction (the total time taken for the additional procedure was 15 minutes). The similar observation has been given by Roth et al. [1]. The procedure can be done under direct endoscopic vision, also controlling the bleeders if required. The resection is performed using cutting current from proximal to distal, and as the tissue gets divided the septal tissue retracts outwards towards the vaginal wall, leaving smooth, mucosa-lined vaginal walls, not requiring any mucosal repair. The open surgical procedure can be difficult due to limited space.

Although, there are no recommendations or guidelines regarding the management of the LVS in the prepubescent girls, we believe addressing the issue of LVS with a minimally invasive approach ensures complete treatment and would prevent from developing any symptoms later in life. Early intervention can also avoid psychological issues that can arise later during adulthood [2].

LVS whether incidental or associated with additional abnormalities can be safely addressed early, even if diagnosed in prepubertal age group. Endoscopic resection using resectoscope is a safe and feasible mode of management, without any long term morbidity and can prevent symptoms which may develop in post pubertal females. It can be done as an independent day care procedure or can be safely clubbed with an additional reconstructive procedure.