Urethral polyp in paediatric population is a rare entity. They are known by variety of names i.e., fibroepithelial polyps, benign urethral polyps and prostatic urethral polyps. They are generally solitary, congenital in nature, common in young boys and arise from posterior urethra. Average age of presentation is 5.2 years [1]. They arise from verumontanum in males and mid urethra in females. Urethral polyps can be incidental findings during cystoscopy or can present with complains of hesitancy, thin urinary stream, urinary retention, haematuria, sudden painful interruption of urinary stream, dysuria, recurrent UTI, Vesicoureteric Reflux (VUR) or enuresis.

We present a case of an 8-year-old boy with urinary frequency and nocturnal enuresis since 3 years. Urine and blood investigations were normal, sonogram was suggestive of bilateral mild hydroureteronephrosis with cystitis. Voiding Cysto-urethrogram showed mildly dilated posterior urethra with irregular bladder wall with no VUR (Fig 1).

Cystourethroscopy revealed a small 1.5 cm pedunculated polyp arising from the verumontanum going towards the bladder neck. Transurethral resection of the polyp was done with Holmium YAG LASER with energy of 10 Joules, frequency 1 Hz and power of 10 Watts. The specimen was retrieved by DJ holding forceps. Patient showed significant improvement of symptoms from 2nd post-operative day and was discharged on 3rd post- operative day. He is on regular follow up without any symptoms. Histopathology report of specimen showed it to be benign polyp containing fibrous stroma and lined by urothelium.

Urethral polyps are rare with only few cases reported so far, from neonate to 70 years of age. Though its incidence is increasing due to better diagnostic techniques and availability of smaller cystoscope exact incidence is not known. Aetiology is controversial; they can be congenital, infective, traumatic and obstructive. Stephens [2] proposed that congenital type may arise as a result of developmental error in the invagination process of the glandular material of the inner zone of prostate. Down [3] considers it as a protrusion of the wall of posterior urethra. Kuppuswami and Moors [4] suggested that it may be due to metaplastic epithelial changes secondary to the oestrogen released during gestation. Inflammatory polyps are considered as a result of UTI however they are uncommon in children [1].

In early infancy urethral polyp can cause urethral obstruction and in older boys they may be incidental or cause urinary obstruction, haematuria, retention, UTI, enuresis or rarely azotaemia and lower urinary tract symptoms [6,8,9]. Intermittency of symptom with symptom free interval is highly suggestive of urethral polyp. There are two mechanisms of obstruction to urine outflow; a polyp with a long stalk lies inside the membranous urethra and obstructs the lumen of the urethra only during voiding and voiding must be interrupted to allow polyp to return to its normal position; alternately, a large polyp with a short stalk may completely obstruct the lumen (Fig 2). 25% of the patients with urethral polyps have VUR6 [3,10], some can have associated hypospadias, unilateral hydronephrosis and bladder diverticulum. 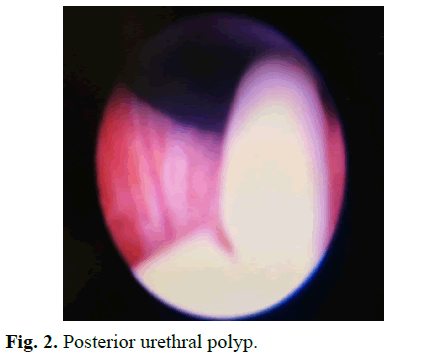 VCUG and USG are the most common initial investigations but are not always diagnostic. VCUG may show filling defect in urethra correlating to site of polyp. CT and MRI may be helpful to rule out other causes. Final diagnosis is done by urethrocystoscopy [6,8,11].

Transurethral resection using LASER or Bugbee electrode is the standard line of management for urethral polyp [8,11]. Larger size polyp can be fragmented into small pieces and can be retrieved from bladder with DJ holding forceps or stone basket (Fig 3 and 4). 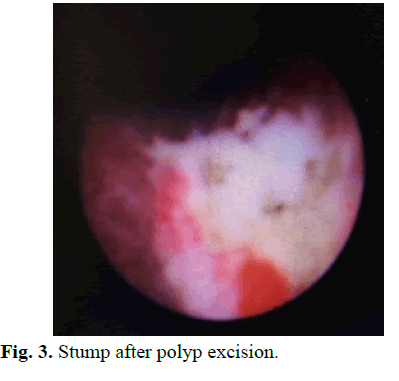 Though uncommon, urethral polyps should be included in differential diagnosis of any child presenting with symptoms of intermittent lower urinary tract symptoms such as urinary retention or haematuria. Cystourethroscopic excision, preferably with Holmium YAG LASER is the treatment of choice for these polyps with minimum rate of recurrence. 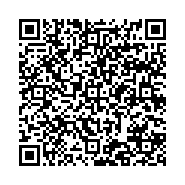