Background: Circumcision is the most common procedure in the neonatal period. PD was adopted for circumcision for a long time, and it underwent many modifications during the last decades. In this paper, we review retrospectively our practice in babies with isolated hooded prepuce that been circumcised with PD by using a new technique called (Traction and closure).

Materials and methods: Between April 2019 and April 2021, 676 cases of circumcision were performed in the pediatric surgery clinic, 398 cases by Winkelmann clamp, and 289 done with Plastibell device. Five cases of hooded prepuce were detected on routine physical examination without hypospadias or meatal anomaly. These cases are characterized by deficient ventral preputial skin comparing to the dorsal preputial skin. All babies were in the neonatal period (less than one month of age) except for one who was 32 days old. The mean age of babies was 15.4 days. Circumcision was accomplished with PD by a new technique (Traction and closure).

Results: Postoperatively no bleeding or urinary retention was noticed in all babies. Upon follow-up, all patients did not have slippage or retention of the ring where the ring fell smoothly over an expected time duration (7-11 days, mean: 9.25 days). Also, good favorable outcomes and parental satisfaction were both obtained in all cases.

Conclusion: PD with technique (traction and closure) is a safe and suitable method for circumcision in babies diagnosed with an isolated hooded prepuce

Circumcision is the most common procedure in the neonatal period. The main indication for circumcision in the middle east and Islamic countries is religious. Many methods and techniques have been adopted such as PD, Gomco Clamp, Winkelmann clamp, Mogen clamp, etc.

Between April 2019 and April 2021, 676 cases of circumcision were performed in the pediatric surgery clinic, 398 cases by Winkelmann clamp, and 289 done with Plastibell device. Five cases of hooded prepuce were detected on routine physical examination without hypospadias or meatal anomaly. These cases are characterized by deficient ventral preputial skin comparing to the dorsal preputial skin. Two cases of them referred from other centers requesting circumcision with classical dissection technique due to abnormal shape of the prepuce. All babies were in the neonatal period (less than one month of age) except for one who was 32 days old. The mean age of babies was 15.4 days (Ages 3,12,14,16,32 days). Circumcision was accomplished with PD by a new technique (Traction and closure). 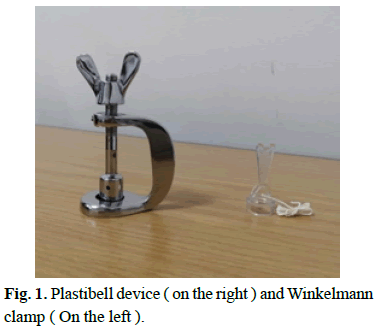 Fig. 1. Plastibell device ( on the right ) and Winkelmann clamp ( On the left ).

The procedure was performed by the same pediatric surgeon for all five cases with the following steps:

• The baby is positioned supine on the circumcision restraint board (baby holder) and gently fixed.

•The baby prepped and draped in a normal sterile fashion using chlorhexidine gluconate 0.05%, after that, a local ring block with lidocaine is given at the 2 and 10 o’clock of the penis base.

•The preputial opening is enough wide to facilitate placement of PD, so making a dorsal slit in the prepuce is usually not required.

•By using mosquito clamp, a gentle separating of the adhesive prepuce from the glans is made along with removing of the smegma gently which is located around it. A marking pen is used to determine the proposed cut edge of prepuce at the coronal sulcus.

•A Plastibell size is determined according to fitness for the baby's glans.

•Traction stage: Hold the lateral dorsal edge and ventral deficient edge separately with two mosquito clamps on each side, then make maximum traction through both mosquitoes to bring them to the marking signal along with applying of Plastibell devise (Figure 2). 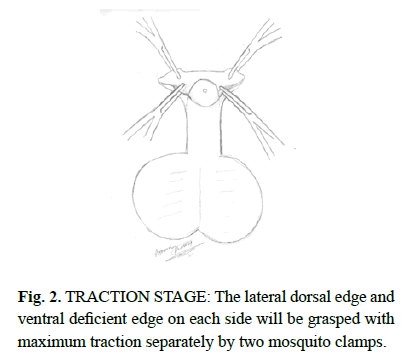 Fig. 2.TRACTION STAGE: The lateral dorsal edge and ventral deficient edge on each side will be grasped with maximum traction separately by two mosquito clamps.

•Closure stage: After that, grasp both edges together with one mosquito clamp (L) to close the exposed space with skin over the ring. This closure enhances the previous applied traction and stability of the ring inside the preputial opening as well. Applying this hemostat should be along with the removal of the previous two hemostats at each side (Figure 3). 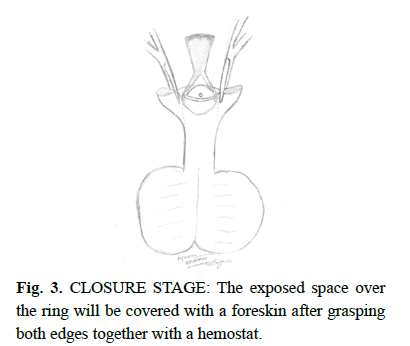 Fig. 3.CLOSURE STAGE: The exposed space over the ring will be covered with a foreskin after grasping both edges together with a hemostat.

•At the site of 12 o clock, you may need to apply another mosquito clamp proximally for adjusting the marked skin (M) to be over the ring groove. (Figure 4). •Finally, tie the thread over the ring groove tightly and cut the skin combined with paying attention to the glans and urethra. At times, even after applying this technique, if you notice severely deficient ventral skin, you should tie directly over the ring. Fortunately, in all cases, we didn’t need to tie over the bell (Figure 4)

•The circumcised baby is re-examined 15-30 minutes later and discharged on Mupirocin ointment 2% TID for 10 days and oral paracetamol for two days. All babies showed good hemostasis without bleeding, so the parents were given the instructions of care through a printed paper. Our recommendations insist that the circumcised baby should have sitz baths twice daily each time for 15 minutes with warm water until the ring falls.

On post-op follow-up, no bleeding or urinary retention was observed in these cases. All five babies did not have slippage or retention of the ring where the ring detached gradually and fell during the expected time (less than 10 days). Good favorable outcomes and parental satisfaction were both obtained in all cases.

Circumcision is the most common procedure in the neonatal period. PD was adopted for circumcision for a long time, and it underwent many modifications during the last decades.

In this paper, we reported five cases of neonates with a hooded prepuce who underwent circumcision with a PD using a new technique (traction and closure). Two cases were referred from another medical center searching for circumcision with sleeve technique. Therefore, we stress to consider this new technique to obviate the unnecessary cost of a long procedure under GA and suturing.

In a review of literature, I found one paper talking about Plastibell circumcision for babies with hooded prepuce or glandular hypospadias, this study includes 21 children with hooded prepuce (age 1 to 11 months, mean 4.6 months) who were referred for hypospadias repair. Four of them did not have a meatal anomaly. Their parents accepted this small anomaly and requested circumcision without glanuloplasty. Postoperatively, no complications occurred in the circumcised patients, except delayed falling of bell in one case that was removed by a surgeon, after the tenth day [2]. The technique includes traction of the prepuce and applying the ring, then tying the thread. I believe this technique needs another assistant to keep the ring in place during making the tie. Furthermore, the applied traction without closure maybe not enough to perform a perfect cut of the marked prepuce. My technique includes the closure stage that secures the ring in place and averts the creation of excessive ventral prepuce that may happen if only insufficient traction is applied.

Sometimes during operating PD circumcision, the mucosal layer of the foreskin is inadvertently pushed inward during placement of the ring causing post-op excessive mucosal layer. Therefore, it is better to hold both layers together before pushing the ring over the glans. One study created a modification where a stay silk stitch will be taken at the end of dorsal silt to fix the dermal and mucosal layers closely to prevent slipping of the mucosal layer behind the ring [3]. In our technique, due to the widening of the preputial opening, a dorsal slit will not be required and both mucosal and dermal layers will be joined together throughout the procedure without slipping.

On the other hand, Hammad et al. introduced a novel modification of the PD to prevent post-op bleeding that may happen during PD circumcision. This modification includes the removal of a piece of ring ventrally to fit around the frenular fold to keep it untorn when the bell is applied over the glans. Hammad found this technique decreases the rate of bleeding and time of the procedure [5]. A new trend in practice is the use of Plastibell tool for older uncircumcised children, but it is associated with a long time of ring fall off. However, it is simple and quick and avoids using suturing during the sleeve technique [6,7]. In our case series, all babies were in a neonatal period except for one who just started the infantile period (32 days). Also, in a review of the literature, we are unable to find any paper talking about Plastibell circumcision in older children diagnosed with an isolated hooded prepuce, so it remains unknown till now if this technique can be adopted in older children because most of the children with hooded prepuce were usually associated with hypospadias where the repair of both performed simultaneously or at separated times.

Detailed attention to the placement of ligature, selection of appropriate Plastibell size, and adequate parental education are key to preventing post-procedure mishap [8]. Factors that promote early ring fall include young age, using a sitz bath, thinner thread for ligation [9]. Postoperatively, we emphasize sitz bath for all cases operated with PD. In this report, the bell fall took an acceptable time duration (7-11 days, mean: 9.25 days). The limitation of our study was attributed to a little number of cases (5 cases). Larger studies for the same purpose should be conducted to confirm the findings.

Plastibell device with technique (traction and closure) is a safe and appropriate method for circumcision in babies diagnosed with an isolated hooded prepuce. It is straightforward and quick and helps to avoid the classical dissection technique which will take a longer time and may require general anesthesia in older children.