Sacrococcygeal teratoma seen and treated late: About a case and review of literature

Objective: The sacrococcygian teratoma is a germ tumor containing tissues from rare embryonic leaflets, observed most often in neonatal period and rarely in children. We report a case seen and treated late.

Case: We report an observation of an 8-year-old girl, with no pathological history, received in an acute urine retention table pelvic pain, a voluminous sacred swelling of progressive installation without neurological deficit. The CT scan showed a large pelvic projection sacral mass in favour of a TSC. The serum AFP assay was normal. A monobloc exeresis of the tumor, the intraoperative aspect was that of a mixed tumor with fluid component with viscous content. The histological study showed that it was a teratoma.

Conclusion: If the tumor is purely liquidian or predominantly liquidian poses few problems of manage ment, despite the delay diagnosis and management. Solid and hypervascularized teratomas are at high risk of complications, whether ante or neonatal. In all cases, rigorous clinical and para-clinical surveillance will be established.

Sacro-coccygian Teratoma (TSC) is a rare congenital tumour, most commonly observed in the neonatal period. A few rare cases in older children are reported in the literature. The classification of the American Academy of Pediatrics Surgical Section distinguishes four different types according to the location and extension of the tumor. Type I and II are exopelvic (with endopelvic extension for type II), type III is pelvic with abdominal extension and type IV is essentially abdominal [1]. The treatment of these tumors is essentially surgical and consists of a monobloc excision of the tumor carrying the tip of the coccyx. We report the observation of a case seen and treated late.

Patient of 8 years, fifth of the couple, whose mother is 42 years old with a parental inbreeding of 1st degree. Received at UAA for acute retention of urine with pelvic pain. The observation reveals a suprapubic catheter, a gluteal mass predominantly right, measuring 35 cm of large diameter, covered with a skin of normal appearance, tense, repressing anterior the anal orifice (Fig 1). The abdominal ultrasound pelvic pelvis shows a large mass with a mixed component of pelvic extension with medium vascularization. The pelvic computed tomography carried out shows a voluminous mixed presacral formation predominantly liquidian and a micro calcification with a net wall measuring 170 × 80.3 × 74.7 mm with a discharge of the rectum and the bladder in front. Pre-operative analysis of alfa foeto proteins returned to normal at 2.4 ng/ml. After informed consent of the parents the patient was programmed in the or for surgical removal. 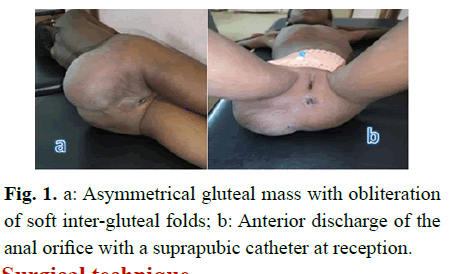 Patient in prone position, billot under the pelvis; head in neutral position on a gel head; type of anesthesia: General anesthesia+orotracheal intubation (Fig 2).

First perineal posterior by a cutaneous incision in Z, encompassing the mass; continuous dissection with electrocauterization up to the level of the tumor capsule; separation of the lateral gluteal muscles (retracted to the right and spread over the left mass); the sacral artery seen and ligated; the sacro-coccygian divided by scissors leaving the coccyx attached to the mass; excision of a bilobed mass of mixed consistency measuring about 30 cm long. Reconstruction of the buttock muscles in the midline and excess skin was excised and closed by simple stitches. Postoperative complication was noted as partial skin necrosis (Fig 3). The anatomopathological examination shows a squamous and not atypical epithelium resting on a dermis with sebaceous glands. The hypodermis was made of regular adipose tissue organized in lobules separated by fibrous or collagen tissue in favor of sacrococcal teratoma. AFP serum rate control at two weeks was normal 2.4 ng/l.

Sacro-coccygian teratomas are rare tumours; however, they are the most common tumour in the neonatal period. They are localized at the sacrococcygian level in 57% of cases [2]. Several theories are advanced to explain the occurrence of TSC. For Middeldorpf [3], the TSC is due to a defect in resorption of the anal cloacal membrane. Askanazy [4] in 1907 evokes an escape of certain embryonic cells to neuronal induction. According to Willis TSC develops from the pluripotent cells of the Hensen node. The Hensen knot for collar, is an aggregation of pluri-competent primitive cells originally located on the posterior part of the embryo. These cells migrate secondarily to the caudal part during the first weeks of embryonic life to the anterior part of the future coccyx. It is most often a benign tumour, detectable before birth or during the neonatal period. It occurs most frequently in female children [5]. In our case it was a daughter received at the age of the big child. Other authors reported cases seen and diagnosed late [6] reported two un-usual cases including one at the age of 3.5 years. Mallé also reported two cases of TSC seen late at 20 months. In most studies the female sex is the most exposed [7-9], as our case proves. Family cases of TSC have been described, Aschcraft and Holder suggesting that the tumor is inherited autosomally dominant. In our case there is no family history of TSC. Most TSC are diagnosed or visible at birth. It is most often a visible mass at the sacrococcygian region [10], median, implanted on the sacrococcygian region and seems to prolong the trunk of the child [1] by deforming the gluteal region and the perineum; the latter is more or less distended, The anus is often pushed forward and the vulva is horizontalized. The variable character and the extension of TSC explain some late discoveries by signs of compressions at a stage where malignant transformation is not uncommon. These decompression signs can be digestive (constipation, occlusive syndrome) urinary tract (acute urine retention) or nerve compressions. In our case, she had a type II TSC with signs of compression of the urinary tract to acute urine retention type. The size is variable, ranging from 1 to 30 cm with an average of 8 cm [11]. Altman, et al. [12] classified TSC according to their size in three groups.

Medical imaging is essential. It makes it possible to evoke the diagnosis to determine precisely the extension of the tumor and its possible repercussions. It makes it possible to evaluate the anatomical components of the tumor and even sometimes calcifications within the tumor. Calcifications are present in 33%-50% of TSC cases, but there is no correlation between their presence and malignancy or benign tumour [13-15]. Gross, et al. [16] explains these calcifications by the presence of bone, cartilage within the tumor. In our case we noted the presence of micro calcification with a mixed component predominantly fluid with a well differentiated wall without signs of metastasis. AFP is considered an important key for the clinical differentiation between benign and malignant teratomas, as well as for the evaluation of treatment effectiveness [9] carried out a study on 12 teratoma cases in which they analysed the relationship between the AFP rate and the histological type of the tumour. Based on the results of this study, they concluded that AFP is almost always high in malignant teratoma, but exceptionally high in mature teratoma. In our case the preoperative AFP assay was performed was normal, which confirms the reported data from the literature [12,13,17].

The need for surgery is recognized by all authors [7,18] it is indicated as soon as the diagnosis is made, even in the first days of life or antenatal. The purpose of the surgery is to completely eliminate the tumor with removal of the coccyx without damaging the associated structures, pelvic plankhetic muscles or anal sphincter. According to Oury, et al. [19] recidivism is observed in almost 40% of cases in the absence of coccyx removal. In our case we proceeded to a posterior perineal first with monobloc excision of the tumor with coccygectomy. Some authors have a preference for a sacred first in case of Altman type I TSC, while others prefer the combined sacred and abdominal-pelvic route in case of Altman type II and III TSC [20,21]. The closure of the different wall planes is done on a vacuum drainage for obvious topographical reasons including the proximity of the anus. In our case, special attention was paid to the reconstruction that we described as cosmetically acceptable. Chemotherapy is the second therapeutic side, but it is not systematic. Indeed in most cases the surgical procedure is sufficient to cure the patient [21,22] chemotherapy is however an essential complement to surgery in case of primary or secondarily malignant lesion [19,23]. The length of hospitalization in our context was two weeks. This period of hospitalization was explained for the realization of a serum control of AFP. Post-operative complications are reported in literature dominated by wound infection, wound dehiscence, unsightly scar [24,25]. In our case we noted partial skin necrosis. Post-operative monitoring should be adapted to the histological type. The clinical examination should include the rectal examination and the serum AFP level should also be measured, which may rise before any signs or symptoms of recurrence appear [24]. No recurrence noted in our case after 6 months. Mortality is reported in some data from the Wakhlu literature [26] to report 20 deaths out of 72 metastaticrelated cases operated in the majority of cases. Rescoba, et al. [23] reported as a cause of death mainly cardiac and pulmonary associated malformations but also peroperative coagulation disorders.

TSC is a rare congenital abnormality that is in some cases diagnosed late. The revealing clinical picture is variable; tumor excision is the only effective treatment in TSC; anatomopathological study confirms the diagnosis; the prognosis of TSC is generally good; post-operative monitoring, biological and radiological clinic should be performed according to histological type in order to detect early recurrence.